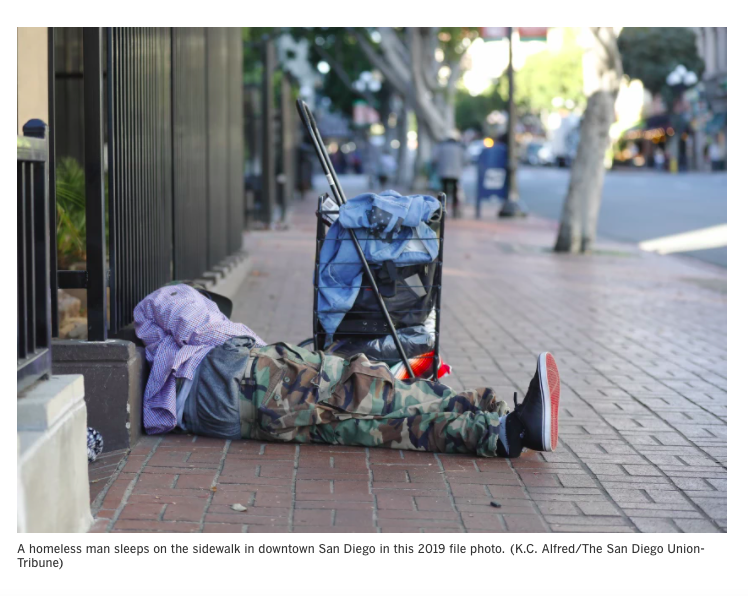 Tuesday Group co-founders Peter Seidler and Dan Shea shared their thoughts on the state of homelessness in San Diego in a recent Union-Tribune opinion piece:

The cost, speed and compassion of adding bridge shelters and converting underutilized government properties are pennies on the dollar and seconds on the hour compared to adding housing.

Seidler is owner and chair of the San Diego Padres. Shea is CEO of Feeding San Diego. Both are members of the Tuesday Group, business and civic leaders who meet weekly to determine how the private sector and the Lucky Duck Foundation can most effectively collaborate with elected leaders to address homelessness. Both authors live in San Diego County.

San Diego’s unsheltered homelessness crisis is at a critical stage. It is prevalent throughout our region as evidenced by the data and other factors.

When COVID-19 first hit, elected leaders worked together to open the San Diego Convention Center, a vacant city property, to quickly add 1,475 shelter beds. This allowed more than 4,100 people to receive shelter, and more than 1,400 ultimately transitioned into permanent housing.

When the convention center transitioned to become a shelter for unaccompanied migrant children in early 2021, homeless individuals not connected to permanent housing either returned to the city’s shelter system or went back to the streets. Since then, the number of people living unsheltered has increased dramatically.

According to the Downtown San Diego Partnership, the number of unsheltered individuals Downtown exceeded 1,000 in May 2021 for the first time since late 2017, when the city was in the midst of the hepatitis A crisis which left 20 people dead. The Downtown count has exceeded 1,000 individuals in nine of the last 10 months. In February, the count reached 1,444, an all-time high and more than double the February 2021 count.

The quickly growing number of people trying to survive on the streets is tragic and completely unacceptable. It’s heartbreaking because these are our neighbors. Our region must be much more effective in helping our neighbors find a brighter path.

The Lucky Duck Foundation funds, activates and leads high-impact homelessness initiatives, and our co-founders, Pat and Stephanie Kilkenny, match all donations up to $1.5 million per year. The Tuesday Group, a group of fact-based business and civic leaders we organized six years ago, meets weekly to determine how the private sector and the Lucky Duck Foundation can most effectively accelerate change.

Both groups do not care who is a Republican or who is a Democrat; rather, we follow the facts and apply sound business principles to immediately help our unsheltered homeless population.

With this said, our firm belief is that more immediately available overnight options such as bridge shelters must be added so that people living unsheltered can have an immediate and direct pathway off the streets. And this must be coupled with a more appropriate level of outreach and enforcement.

For example, a recent effort by the city of San Diego to conduct outreach and clean the Midway District removed 10 tons of debris from unthinkably deplorable street-living conditions, yet only seven people out of nearly 200 people accepted the city’s offer to move off the streets. Most of these people simply returned to the same streets after the area was cleaned.

And while many elected leaders tout the importance of adding housing, housing is a very costly and long-term endeavor. It can be likened to telling passengers on a sinking ship, “Hold tight, we are going to build you some lifeboats sometime in the next five to 10 years.” Our unsheltered homeless population needs more “lifeboats” now.

When we polled San Diego voters in November 2019 on critical factors facing our region, including homelessness, an overwhelming majority — 84 percent — said the city should use underutilized government properties as inclement weather shelters. One example is the old Central Library in Downtown, which continues to sit vacant with its doors locked while homeless individuals literally sleep on its doorstep.

Another example is Golden Hall, an underutilized city property which was partially converted to a shelter. The total cost to add approximately 140 shelter beds in Golden Hall was less than the cost of adding only two permanent housing units when hotels were acquired using government resources to add housing inventory in 2020. Similarly, when the Lucky Duck Foundation purchased industrial tent structures to shelter more than 500 individuals, the same investment in permanent housing would have added only about 16 permanent supportive housing units.

The cost, speed and compassion of adding bridge shelters and converting underutilized government properties are pennies on the dollar and seconds on the hour compared to adding housing.

This is not to say housing is not important or should not be pursued. Rather, elected leaders must operate on parallel paths by adding more short-term, immediate options while simultaneously working to add permanent supportive housing options.

Homelessness can be meaningfully addressed by the courage and action of political leadership coupled with the addition of immediately available shelter beds and a more appropriate level of outreach and enforcement. The other side of this coin is homelessness can be greatly enabled and perpetuated due to the inaction of elected leaders, and by focusing only on long-term strategies, as we are currently witnessing.

Your ticket for the: Padres Owner Peter Seidler and Businessman Dan Shea, both LDF Executive Committee Members, explain the state of homelessness in San Diego in a recent UT opinion piece