Hungry homeless finding it harder to get food during pandemic 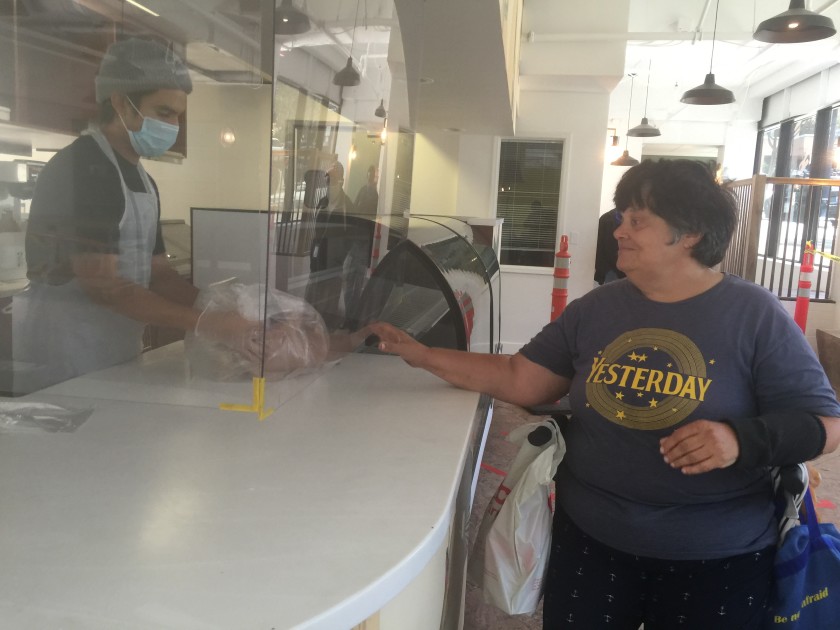 Father Joe’s expands meal services to meet growing need of those living on the street, shut-ins

Life on the street has become even more challenging for homeless people during the COVID-19 pandemic, and Father Joe’s Villages is among the local nonprofits that have stepped up food programs to try to meet a growing need.

“We’ve targeted areas where we heard people were actually starving,” said Deacon Jim Vargas, president and CEO of the nonprofit. “They were just lacking food, and we’ve been serving 75 to 100 meals every time we go out.”

Churches that used to serve meals at their sites have shut down their feeding programs during the outbreaks. Individuals and groups who used to bring food to homeless people living downtown or in parks also have stayed home for months because of county orders or their own fears of catching the coronavirus.

The need for food among San Diego’s most vulnerable population, however, has not shut down.

Father Joe’s Villages for years has opened its doors at its Imperial Avenue locations to serve lunch and dinner to people on the street, and those people now can also get breakfast, a meal that had been reserved only for Father Joe’s residents.

But there were people in other neighborhoods who still were going without food, and Father Joe’s responded by bringing meals to two of its other properties.

At noon Monday through Friday, take-out lunch is served at the nonprofit’s former Toussaint Academy at 1404 Fifth Ave. in downtown San Diego. Shortly after 1 p.m. each day, meals also are served at the Father Joe’s Thrift Shop at 1457 University Ave. in Hillcrest.

Vargas said the feedings are serving an immediate need in getting food to people who are hungry, but the effort also is setting the stage for more long-term help by making a connection with people on the street.

The Toussaint Academy is about two miles away from Father Joe’s main campus and the Hillcrest thrift shop is about four miles away. Vargas said extending the meal program to new neighborhoods has allowed outreach workers to connect with homeless people who otherwise might not go to Father Joe’s for help.

Besides directing them to various services offered by Father Joe’s, Vargas said outreach workers may bring people into the shelter Father Joe’s operates along with the Alpha Project and Veterans Village of San Diego at the Convention Center.

On a recent afternoon, outreach workers from Father Joe’s Village met at the cafeteria at the Toussaint Academy, which once housed transitional-age youths in a program that has been relocated to another site.

A sign on the sidewalk says whatever is being served that day, and about a dozen people have lined up waiting for doors to open.

“What are we serving today?” outreach worker Garrett Williams asked the Father Joe’s worker behind the counter. “Pulled pork?”

Actually, it was chili over rice with mixed vegetable, which was served by Father Joe’s workers behind a plastic window at the counter of the old cafeteria. There’s no tables or chairs inside, and food is packed into containers, bagged and handed to one person at a time while others wait their turn outside.

Williams didn’t stick around. He and fellow outreach worker Manuel Figueroa walked south down Fifth Avenue to alert anyone who might appear homeless about the food program.

“Have you heard about Father Joe’s?” Williams said to one man they passed. “Grab yourself a meal on 5th and Ash if you’re hungry.”

The man took up their offer.

Warren Valenzuela isn’t homeless, but said he is just getting by. He works for tips by blowing large soap bubbles for crowds at Balboa Park, but those have dried up as the park closed during the pandemic. He said he’s also noticed there are fewer people coming downtown to offer food to people in need.

“This helps out,” he said as he grabbed lunch.

A man who gave his name only as William said he is homeless and sleeps in his car, and he’s getting meals every day at the Toussaint Academy cafeteria. He used to get meals at the nonprofit’s Imperial Avenue site, but said the line can be an hour-long wait.

Warren Miller lives in the Sanford Hotel, a single-room occupancy building owned by the San Diego Housing Commission and available to seniors.

“I thought there would be a long line,” he said when he arrived, relieved at the short wait. “But I would have come, anyway.”

Miller said he was bringing food back for others at the hotel, and he wasn’t alone. A man who gave his name only as Uncle Mikey said he had plenty of food for himself at home, but he knows others, especially seniors, who are shut in and are not venturing out to buy their own food during the pandemic.

Terrie Woolever also lives in the Hotel Sanford and picked up a couple of lunches for people living in the same building who are unable to shop for themselves.

“I think it’s pretty nice to have this here,” she said. “With the virus, it’s hard to get food. I know people who can’t walk, and I’m getting food for a couple of them.”

To learn how to donate to Father Joe’s Villages, visit https://my.neighbor.org/cash-donation-faqs/.

The Father Joe’s feedings are among a few new efforts to help feed thousands of people impacted by the pandemic.

Feeding San Diego is conducting large food distributions every other Saturday beginning at 8:30 a.m. Saturday at SDCCU Stadium. One is scheduled for July 11, with the July 4 distribution cancelled because of the holiday.

The Lucky Duck Foundation and other philanthropists also have launched a program to bring food to people on the street throughout the county. The group has partnered with service providers who use their outreach workers to deliver the meals, which are prepared at the Sheriff’s Department’s East Mesa Re-Entry Facility.

Your ticket for the: Hungry homeless finding it harder to get food during pandemic

Hungry homeless finding it harder to get food during pandemic